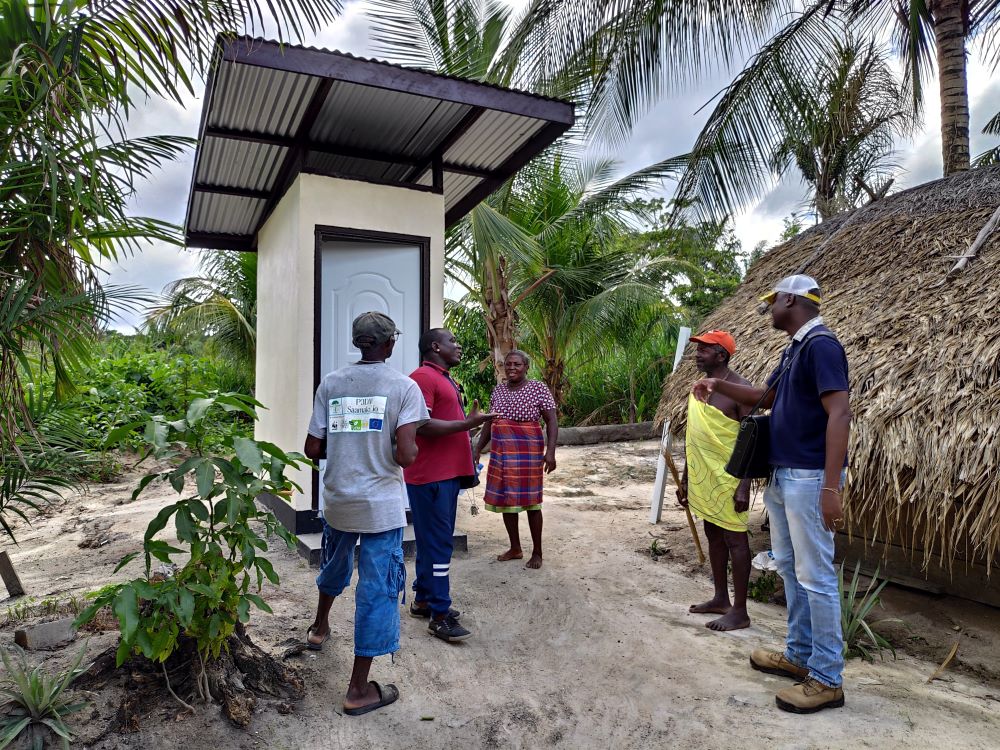 Paramaribo, December 13, 2019. Two rural villages located in the hinterland of Suriname are today benefitting from the installation of new modern restroom facilities for the first time.  The population of approximately two hundred residents distributed over the two villages of Baikutu and Banafow Kondre in the Upper Suriname River, Brokopondo Lake Region, Suriname, were the beneficiaries of twenty- two (22) fully equipped modern toilet units. The communities are of indigenous Maroon populations.

Many remote communities in rural Suriname lack public utilities for human and household waste disposal. Therefore, there are significant health risks for villagers who rely on surrounding rivers and streams as the major source of water for personal hygiene and household consumption, and which are exposed to the waste.

Traditionally, may villagers also walk barefooted in the village and are also prone to risks from exposed human waste, which are potential sources of parasitic and other disease infection. This is particularly evident during the rainy season when incidence of diarrhoea and stomach ailments increases signiﬁcantly, with children being the most vulnerable.

Under the project, modern concrete public toilet facilities, equipped for the potential harvesting of rainwater, were constructed for the use of villagers.  The project will serve as a pilot and in the future eﬀorts will directed at replicating it in other villages experiencing similar problems in the hinterland.

This intervention was made possible through a small grants provided under the Australian Direct Aid Programme (DAP), managed by the Australian High Commission in Trinidad and Tobago, with complimentary funding from IICA’s internal Climate Change, Natural Resources and the Management of Production Risks, and the Territorial Development and Family Farming Programmes. The project was executed in collaboration with the Ministry of Regional Development in Suriname.

The Australian DAP have over the last three years provided grant funding and collaborated with IICA to fund a total of five other projects, four of them provided access to potable water to nine (9) rural villages in Suriname through the establishment of rainwater harvesting systems in these villages, and one project supported the introduction and expansion of permapiculture utilizing Perone Hive technology to Beekeepers in Suriname.

The completed sanitation units were formally handed over to the Villages’ authorities at a small handover ceremony held for this purpose on Tuesday, December 10th, 2019.