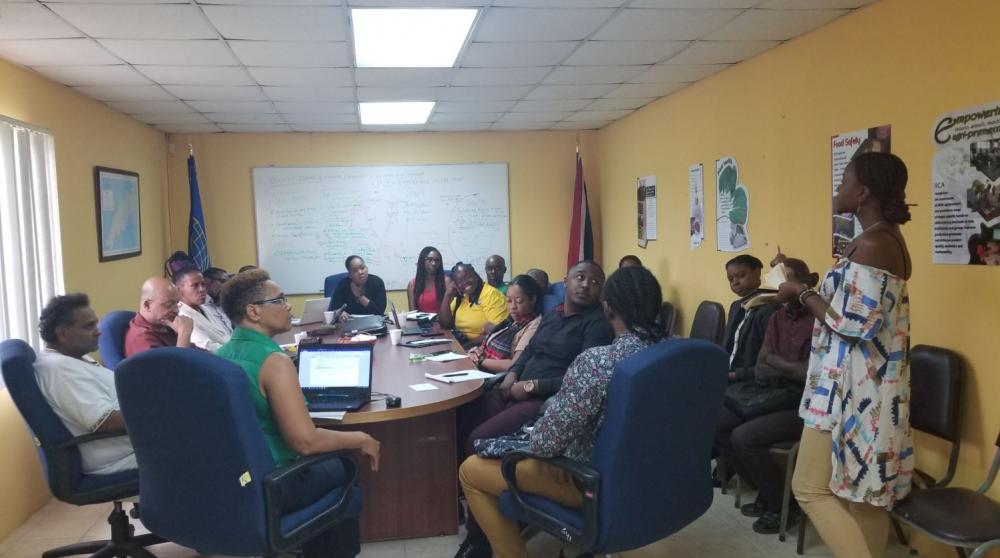 Port of Spain, January 28, 2020 (IICA). A core of micro and small businesses (AgriMSEs) met at the offices of the Inter-American Institute for Cooperation on Agriculture (IICA) in Trinidad and Tobago, to reflect on the experiences and outcomes of IICA’s support in 2019 and to consider IICA’s plans for engagement in 2020.

Most of these AgriMSEs had participated in promotion and marketing training, and also have been benefited from the product development and business networking provided in 2019, under the IICA International Trade and Regional Integration Program, at the headquarters of IICA in Costa Rica, with full support from the specialist on AgriBusiness and Value Chains for the Caribbean, Allister Glean, based in the IICA Representation in Saint Lucia.

During the dialogue, IICA Representative in Trinidad and Tobago, Diana Francis, reiterated that “while IICA is not a donor agency, through well-targeted technical cooperation resources and partnerships with key players, we have been able to leverage our human expertise and institutional positioning to provide tangible support to AgriMSEs”.

Other recognized collaborator was the Trinidad and Tobago Manufacturers Association (TTMA), which enabled participation of 6 AgriMSEs in its annual flagship Trade and Investment Convention.

The rich engagement and trust of the AgriMSEs stakeholders in IICA also inspired innovative and proactive support, with IICA Representation in Trinidad and Tobago utilizing selected AgriMSE food products in catering of IICA organized events and spearheading an AgriMSE Christmas Gift initiative marketed directly to institutional collaborators, staff, family and friends, among others.

Twigs Natural´s, who participated in a Christmas Gift Basket initiative, expressed deep appreciation to IICA for providing his business with this additional marketing opportunity, indicating that he “added five new customers who had received Twigs teas in a gift basket and as a result, made contact for additional purchases and to explore other tea flavours”.

The AgriMSEs agreed that targeted and tangible support was preferred to generic training and information dissemination. They also confirmed that an important benefit from their engagement with IICA was the fostering and facilitating of more opportunities for mutually reinforcing business-to-business networking with each other.

Indeed, at least two AgriMSEs expressed their obligation to give back, having benefited from development support from national entities, as well as IICA. An immediate ‘give-back’ was the offer from House of Arendel, a chocolate products processor to include products from interested AgriMSEs as part of a retail arrangement negotiated with a high traffic establishment to market local agricultural products over the entire month of February.

A similar offer was made to IICA by NAMDEVCO, to extend the use of its select high-traffic farmers’ market sites to host special Market Fairs dedicated to AgriMSEs, an offer that the AgriMSEs fully embraced. This is based on the observation by Nirmalla Persad, NAMDEVCO's CEO, of the effort by IICA, to help create additional value for AgriMSEs through tangible business opportunities and direct marketing, while simultaneously strengthening existing institutional ties.

In closing, Diane Francis invited the AgriMSEs to view a small but dedicated space for them to ‘nest or hub’, from time to time, to conduct their management-related business matters. This gesture was unexpected, but very well received by the AgriMSEs, and sparked spontaneous rounds of free-flowing networking, sharing of experiences and contact information long after the IICA briefing had ended.