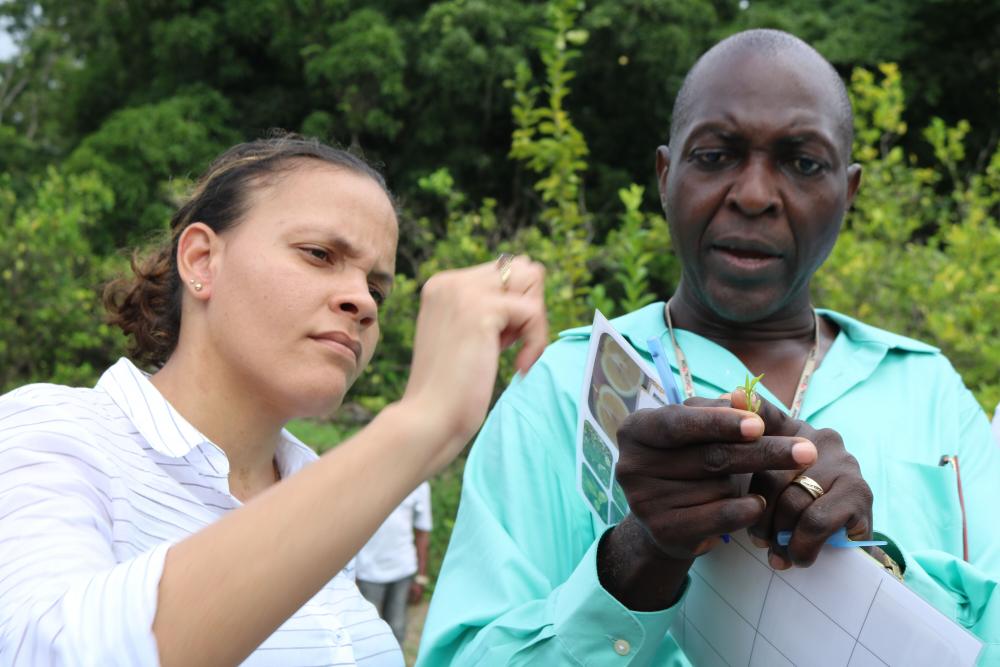 Castries, Saint Lucia, November 22, 2019 (IICA) - Farmers, nursery operators, extension officers and crop protection and research officers from the Ministry of Agriculture in Saint Lucia were trained in identifying the Asian citrus Psyllid symptoms in infected plants for the early detection, and good practices for controlling the spread of the Citrus Greening (Huanglongbing) plague.

The Asian citrus psyllid (ACP) is an insect that acts as vector spreading Huanglongbing (HLB) or citrus greening, a devastating disease of citrus trees. Since its official confirmation in 2016, the disease has spread to major citrus-growing regions of Saint Lucia.

Citrus Greening disease not only poses a threat to the EC $5.12 million (USD $ 1.89 million) local industry, but also affects important livelihoods and cross-sectoral advantages, like apiculture, given that citrus is a major source of forage, and agro-tourism linkages.

According to FAO, Citrus Greening is probably the most serious and devasting of all diseases affecting citrus.

IICA is supporting actions from the Ministry of Agriculture, Fisheries, Natural Resources and Cooperatives to build capacity of stakeholders in the citrus industry, especially farmers, nursery operators, crop protection technicians, and extension officers for the early detection, rapid detection and response and control and long-term management of citrus greening disease.

Alfred Barrett, Citrus Protection Officer of the Ministry of Industry, Commerce, Agriculture and Fisheries in Jamaica conducted the four-day training to 25 stakeholders as part of the Inter-American Institute for Cooperation on Agriculture’s (IICA) support to Saint Lucia’s fight against the devastating citrus plague.

“Change is never going to be easy, it takes a lot of time and effort. Those who are willing to change are going to survive”, said Barret.

The training specifically drew on the experiences of Jamaica for the control of HLB. In so doing, it added weight to the recommended management protocols, as well as relevance given that they were readily applicable to Saint Lucia as another developing state with similar resource and human capacities.

The participants conducted field activities for identification of symptoms and visited a commercial nursery to discuss appropriate control measures at these important stages.

Deputy Director of Agricultural Services, Barry Innocent; the Head of Research Division, Hannah Romain; and the extension and research officers attended the workshop.

“Orange juice is a staple on most breakfast tables, but the future is threatened by the global spread of citrus greening disease.  This workshop gives us in the Caribbean an opportunity to be in a place of greater strength in the fight against citrus greening”, said Barry Innocent.

IICA Representative in the Eastern Caribbean States (ECS), Gregg Rawlins, stated that IICA is extremely pleased to have this opportunity to work closely with our partners at the Ministry of Agriculture and with the stakeholders to host this very important building capacity for the management of citrus greening.

“I should indicate that our Director General, Manuel Otero, has attached great importance to the supporting the ECS and had indicated us to identify some priority issues that needed to be addressed in various countries”, said Rawlins.

“The issue of managing citrus greening required urgent attention with interventions that allowed for this important industry to receive some of the support that is needed to preserve our production”, added Rawlins.

The knowledge and experiences shared with the 25 participants from around the island of Saint Lucia is expected to result in earlier identification of the disease and improved on-farm and in-nursery practices for management of the disease.